Okay – so maybe your pictures have graced this page and maybe they haven’t – maybe you’ve been revealed as a Fauxtographer, and maybe not. The truth is – it might sting a bit, but it doesn’t mean you can’t be a good photographer – just stop showing what are essentially your practice shots on the internet! Remember, people have been taking hilariously bad photos since George Eastman started mass producing roll film cameras in the late 1800’s. The difference between now and then is social media and how easy it has made it to get just about anything to the masses. There is no longer a critical reviewer – an agent, or a book publisher, for example, to separate the below average from the excellent. This shift has blurred the lines between professional and amateur so much that people get confused.  Even though I primarily read YANAP for laughs – I also think the page is making an important point about the current ‘anybody can do it’ attitude towards photography. When people have work displayed on this page, it’s not because they are beginners, it’s because they are beginners REPRESENTING themselves as professionals. Here are my top six ways to stay off these pages forever:

Only Show Your Best Work

I once was asked to join a beginning photographer’s Facebook page. Although he had potential, the first thing I noticed was that he put every picture he took up on his site. He would go for a fifteen minute walk in the woods and post 65 pictures. Frankly, it was boring, and I stopped looking after 10 or so pics. Don’t make your audience choose the best picture from your entire photoshoot– YOU do it. Less is more. Three great pictures are way more impressive than 15 okay ones.

What is it you like about another photographer’s work? Is it Joe Mcnally’s exquisite lighting? Jeremy Cowart’s great composition? Moose Peterson’s mastery of natural light? When you really think about why you like a photographer’s work you can start figuring out what’s important to you.

Hang Around Other Photographers 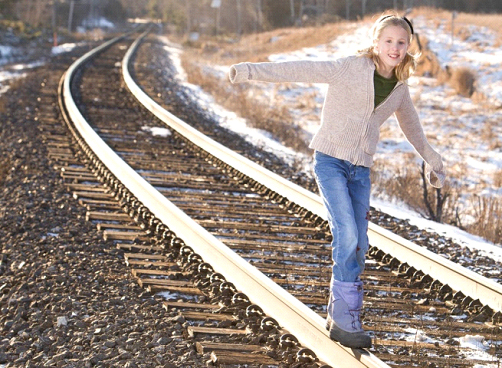 I once took a picture I loved of my daughter on some railroad tracks. The whole point of the shoot was to practice using off-camera flash in hard outdoor light.  I showed my favorite to a bunch of people and got lots of positive comments. I showed it to a photographer friend who also liked it, but then said – “the railroad tracks are sort of hot” – meaning I had overexposed the highlights. You know what – he was right! I wasn’t looking at the whole picture – just my subject. Other photographers won’t always stroke your ego – but they will often sharpen your skills.

*A word of caution – don’t hang around overly critical photographers who never have anything good to say. Often they are trying to hide their own insecurities and they will suck the fun out of it for you…

Don’t Be Too Creative (at least right away)

Sure creativity is much appreciated and sought after – and I admire creative photographers like Jill Greenberg or Anne Geddes greatly, but your first paid gig may not be the time to get too crazy. YANAP is filled with pictures done by creative people who lacked the skill set to pull off their ideas. They soldiered through anyway – and the results were, of course, disastrous. Get your light right, do a couple of ‘typical’ poses first and get the basics down before you go nuts. There is a reason some poses and shots are done over and over again – they work!

Don’t Be Afraid to Give Up

About a week after I got my first digital SLR I had this great idea to shoot a girl baking and dropping eggs. I rigged up a glass panel on the floor of my kitchen and wriggled under it with a camera. I had my one of my daughters dress in an apron and we covered her with flour. She would drop eggs onto the glass panel as I shot. We did a lot of shots and had to clean the glass between each one. The kitchen was a mess. My daughter was a mess, I was a mess. In the end, though, the shots were… well, terrible. I had no idea how to light them properly and the angle was all wrong. I wish I had copies of the pictures to show you – sort of… The moral of this story? Effort doesn’t always equal results. Sometimes even good ideas don’t work out. When this happens – do NOT watermark the images and display them on your webpage. Delete them, apologize to your wife for the mess in the kitchen, buy your daughter an ice cream cone and chalk it up as a learning experience!

Practice a lot and you will get better. Don’t show off the majority of your practice sessions. Oh yeah, and don’t charge people to help you practice! As a largely self-taught photographer, I have found the work of improving my skills to be immensely satisfying. Part of the fun is you’re never quite finished – there is always more to learn!