Reply To: Why is everyone hung up on NOISE!?!

Noise?  And shooting 12 frames a second is somehow going to reduce the noise. I would love to see that technology in action.  EyeDoc, I think this guy from what you explain is just a gear-hound and uses that rapid fire technique to drum up conversation so he can “talk” about his gear.  And when I say “talk” I mean show it off.  From what you are stating, it sounds like he doesn’t know much about his camera except that it has a lot of features that do nothing for the final result.  Maybe, if he lowered his shutter speed, bumped up the ISO and maybe, just maybe used a flash, his shots wouldn’t be so noisy, even shooting above 6 fps and in low light.  Full frame is fine, I’m all for it, hell why not bring out the medium format Hasselblad.

I get the shooting fast for “catching the action” but rapid firing shots of little girls in the park for a Chinese New Year Event, sounds just plain stupid to me.  Sports or fast moving action shots, okay sure, but in low light, without high speed sync flash, not going to work. 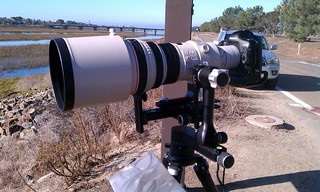 I use the gimbal for a couple of reasons, smooth shots and I don’t have to try to hold the lens while shooting, kind of going with what CC stated.

CC, I do the same thing, when just shooting around town, I’ll bring my smaller bodies out for use, it’s just easier on the wrist.  My Rebel T3i has pretty much the same sensor as my 7D minus a lot of speed and other useful features, but it is so lightweight, it is practically a P&S.  And it fits with all my lenses, so perfect.  I think I get funny looks sometimes when I am walking around with my T3i and have expensive glass attached to it.