Reply To: Strobes vs. Christmas tree

The short answer is, it depends.

Here are tree lights and some people, from last Christmas.  No flash.  Just ISO, fast glass, short lens, hand held with ambient light.  To be fair, the people weren’t all that fast. 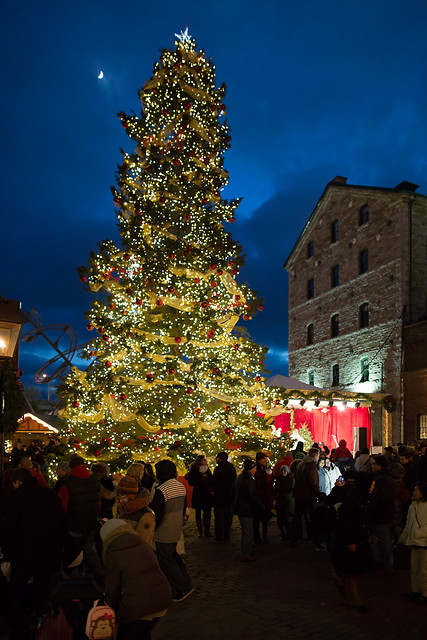 And the tree was pretty big, and maybe a little burnt out around the tree lights.  The girls/women in white coat and blue coat are lit by someone else’s flash, possibly from a cell phone.

Here is another sample from the same event.  I have no idea who the woman is, so I wasn’t trying to light her, just to get the overall notion that there were lights, some colour in the sky, and that people were present.  If a flash had been used at low power, she would have been lit.  Any motion within the flash’s range would have been stopped or minimized, and that woman would be much brighter.  The background would not be affected much due to the distances involved. 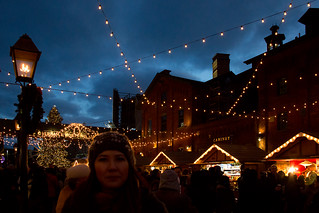 The keys are:  Shutter speed and aperture affect ambient light.  Aperture and flash power affect light from the flash.  Christmas tree lights and any other bulbs are part of ambient light.  The flash from most studio strobes is around 1/1000th.  Flash from small flash and some specialized studio strobes can be as brief as 1/10,000th!  Sync speed is usually 1/200th or 1/250th for most dSLR cameras.  That’s the speed where the first curtain has fully opened and the second curtain has not started to close.  Faster than that you need High Speed Sync, which fires the small flash multiple times.  This is not that good at stopping motion, you are better off with a slower shutter speed and single pop from the flash.