quick addition to ask you to look at: 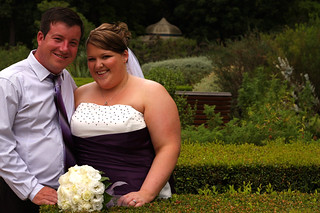 this picture was requested by the couple, as they wanted the flowers atop the hedge and the gazebo they got married under in the distance.

I had to edit out a crowd of people over the groom’s right shoulder as it was a busy botanical garden, and if I moved the frame any further left an array of people (not in the bridal party or attendees, but the public) would be in frame.

Other than the fact that I overlooked the grooms tie not being placed nicely in front of him, I really like this picture. The only thing I’d have liked would be if we could get rid of the bench, but due to the limits of the space it was either bench or people.