Reply To: It's been a long time

The link “thing” displays a Flickr photo if the link points to a photo that is not protected by having to log into Flickr.  Display the link on its own line and it should display a thumbnail here. 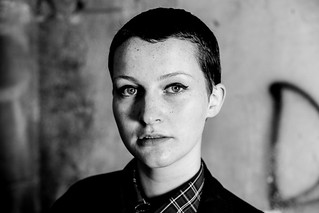 you can see the top of her right ear!  Her head should be turned ever so slightly more, so the ear disappears but skin at the edge of her face is not broken by the eye.  She has a good notch by her eye, so careful turning of her head should work well.  Now that it’s shot, you could fix it with Photoshop.  It may have been better to get the light up so the shadow of her nose reaches down to touch the corner of her lip.

In Harriet and the car park, 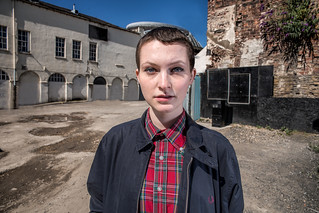 I’m not sure why a nice chick like Harriet would frequent a car park.  I also don’t know that you did her any favours by shooting square to her chest, or by standing her where that object on the distant roof was starting to become a hat.  Can you explain what the unpaved road between a couple of derelict buildings does to aid the photo?  Chalk it up to my over-active imagination, but why does she look like a teenage boy who is being photographed by a concealed camera during a drug purchase? 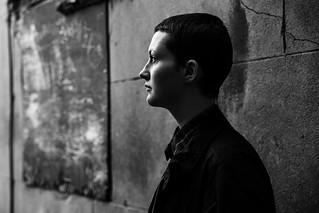 androgyny strikes again.  I can’t decide if it is the photography or the model.  I keep seeing a teenage boy.  Ah, well, in this one, the bright spots on that sigh are a distraction.  The good news is that you can’t make out any of the words on the sign.  There are some spots on her skin that could be cleaned up. 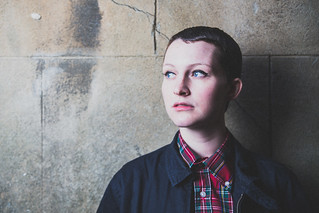 seems over exposed.  Though, while too bright for the face, her jacket and shirt look pretty good.  She is too close to the wall for your camera to blur it much.  What is that blob on the wall, someone needed a place to put gum?  Once again, her skin could stand a little work.

That last one had 946 views, 78 faves and 2 comments, all of which were more favourable than what I had to say.  You have to decide if I’m too cynical or your Flickr friends need to get out more and are just being nice because you stopped by and left nice comments for them.

For those reading along, “last one” is the last of the Harriet set that I’m going to comment on.  The Flickr photostream has 1,428 photos, presently.  I skipped from the first page to the last and worked backwards a little.  This one 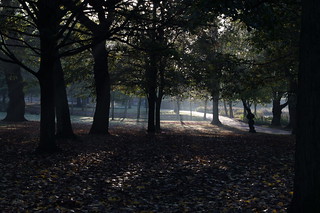 All together, the photostream seems to have better portraits earlier, and some good landscapes/cityscapes.  With extensive thoughtful pruning it could be a very nice gallery.