Reply To: I don't think I'm a fauxtog, but still value critiques

I don’t mind the differences in colour.  There is a lot of reflection off the red wall and you are into gold hour followed by the blue hour.  You can colour correct them all but then you loose the ambient light.  You could light the toddler with a flash which would keep him the same colour while the ambient light remains as it is but you have to keep the flash off the background which can be a challenge.  There are tricks for that, of course.  As individual pictures, I think the light is fine as it is.

The wall is too busy.  Did you sharpen it?

I would crop out the people in the top of the yellow beach photo, unless they are part of the family.  Cropping also makes the child larger in the frame and the camera angle makes more sense then.   I would adjust the exposure about a quarter stop darker.  If you use the shaded part of his sock as a white reference, it makes the whole scene brighter and more yellow.  Exposure has to be dropped a stop and a quarter.  It does interesting things to your foreground water.  I think it draws attention away from the child though.  Probably not the desired effect.

The blue beach might have benefited from a polarizing filter to cut reflection from the water.  It may have benefited from a lens hood although the reflection might be too direct and would get past a lot of hoods.  A different angle may have helped reduce the reflections.  As WCS said, a lower camera angle may be good.  The usual advice is to get down to your subject’s level when shooting children.  Getting lower also makes women look more “leggy” which can be flattering.

I think the last three are alright as family photos, but none are great.  I too, don’t see much difference between the current and past photos.  The good news is that they are in focus. 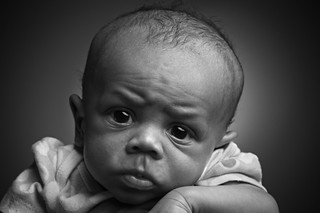 He looks so old and world weary!

The dogs would be better from ever so slightly further back.  The one on the left has its nose clipped by the edge of the frame.