You are welcome.  Thanks for responding to the questions.

So, of the three responses you received, one was quite brief, though accurate, and the other two both highlighted depth of field issues.  Understanding the concepts and having some notion about the practical aspects can be a big help.  There is a calculator here, along with an explanation:  http://www.dofmaster.com/dofjs.html.  I’m not convinced it is 100% accurate, but as a general overview and guide, it’s quite reasonable.  Strongly recommended reading.

You have a flash you can fire, off camera, and you seem to like water drops, though your earlier shots look better than your recent ones.  This is one of mine: 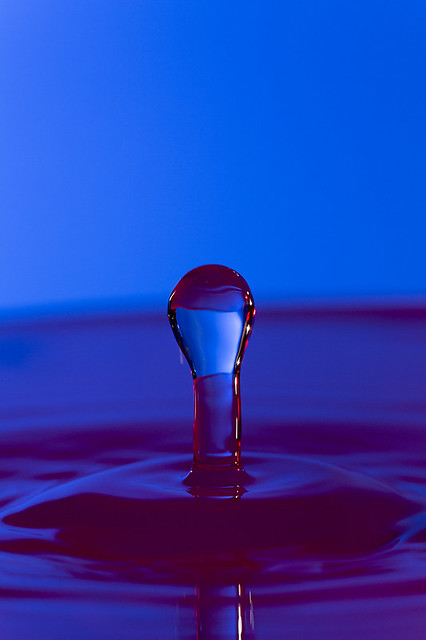 There are more and that one is between a couple of set-up photos.

Looking at Stretch, that one lone drop at upper left looks quite sharp, so, I’m thinking depth of field/focus point may be the problem, rather than motion blur.  I expect it was a flash photo.  Flash will freeze water drops as long as you have a short enough duration.  I don’t think your flash can do high speed sync, but if you get one that can, don’t use the feature for water drops, it causes blur.  Some of my water drops were shot at 150 mm and some at 100 mm.  I see the one I referenced was at 150 mm.  It was also at f/11.  Even though it was off camera, my system indicates flash fired.  Power was probably somewhere between 1/8th and 1/32nd.  The flash is only a foot or so from the splash so a lot of power is not needed.  Actually, 2 flashes with different gels.  If you need more power, put plastic wrap over it to keep the flash dry and push it closer.  A part power flash is shorter duration than a full power flash so it has better motion stopping ability.  Arrange for the drop to always land in the same place then use a knife or ruler to set focus.  Place it across the basin so it is dripped on, focus, then remove it.  Chop sticks also work.

The blur of the boat.  Yes, boats move.  Both wind and waves are problems.  Sometimes you have control and sometimes not.  If the waves are from another boat, wait for them to settle.  If waves are from a storm, you have to wait for another night, or use a different technique, like a faster shutter speed.  An option is a slow shutter exposure to smooth the water and a fast exposure to get the boat, then put them together in Photoshop.  If the camera is locked down on a tripod, you should have no trouble aligning two photos later.

The blur issue with the Tempe Town Lake Bridge, may be the result of inexpensive gear.  I have a couple of cheap tripods.  I paid CAN$50 for each of three of them.  I also have a carbon fibre tripod that was about CAN$400 for just the legs, the head was another $350 or so.  Actually, they are all very good in their own ways.  One of the $50 tripods is a Velbon Sherpa.  A spindly little thing that can hold a pro body and 100 to 400 zoom, if there is no wind.  In wind, it twists and wiggles.  But it does not weigh much, under 2 lbs with head.  Good for selfies when traveling.  The other two $50 tripods are pretty heavy duty, heavy aluminum things which came with heads.  One is almost 40 years old and I got an excellent deal on the other about 10 years ago when a store wanted to get rid of their last one.   They are good for the studio, or trunk of a car.  Not so great for carrying across Europe.  Carbon fibre is good when it is cold, you don’t freeze to it.  And it is relatively light while settling vibration quickly.   Blah, blah, blah.  Anyway, a good sturdy tripod that is heavy enough to withstand wind and light enough to carry to where you need it is a wonderful thing.  Sometimes instead of a tripod, I use a thing that looks like a C clamp with a ball head on it.  I have two of those, of different weights, materials, and ages.  If there is something sturdy to clamp to, they are a good option.  Sometimes I just put the camera on something sturdy and press it down.  Whatever works.

Looking at that photo, the building lights on the left seem to blur left, while the building lights under the bridge on the right seem to blur right!  Usually when there is motion blur caused by camera movement, the whole image blurs in the same direction.  So, my thought is that your lens is providing blur.  But, in long exposure images, the sensor is read several times by the camera’s computer, so it could be the camera was pointing more in one direction when that part of the sensor was read, and more in the other direction when the other side of the sensor was read.  Some tests with the same lens, same focal length, same aperture, and a bright target that uses a short exposure may be enlightening.  A better tripod might help if it caused by motion.  A clean lens and lens hood help eliminate flare.  So will better glass, but that gets into real money.  The sensor does not have the dynamic range your eye has.  HDR is a technique to help overcome that.  By doing one exposure for the bridge and darker areas and a second for the building’s lights, then combining them in Photoshop, you can get some of the benefits of HDR without the whole process.  You could, of course, do the 3 or 7 shot HDR exercise and use the HDR tool in Photoshop to combine them.  I find I get mixed results with the few I do, so I just do what I want manually.  By not over exposing the lights, they might look sharper.  Use the DOF calculator to figure out the largest aperture that will give a hyperfocal setting that gives DOF to infinity, then try to stay smaller than that aperture.

95°F and distance are not a good combination.  The air moves and causes distortion.  Unfortunately, if those are the conditions all you can do is live with them.  Shooting early instead of late may get you cooler temperatures, but the building lights may be off before first light.  Shooting during the blue period, after the golden hour, at night, is good.  You get the warm building lights and a deep blue sky, but where you are the heat is still present.

In the “After shooting Suegra …” question, I was really looking for “the background has more blur, DOF improved”.  But, I’ll take “composition improved”.

Your https://www.flickr.com/photos/90822098@N07/11792819014/, has lots of things that detract.  Your eye tends to go to bright things, unless they are extremely bright causing you to look away.  The railing she is leaning on is a nice bright silver.  She has the bright white sleeve of her shirt, the reflection from her ring, and all the pale green with an orange door.  Then there are the blobs intruding at the top and down the upper right border.  Her right arm and leg tend to guide your eye out the right side of the frame, while the rail guides your eye out the left side.  And, she has that dark blob just above the edge of her head.   I pulled that photo down and painted out the black, and the orange door, darkened the rail, lightened her face.  It improves it, but you still have better photos of her, and it doesn’t fix her pose.  I think it’s one of those learning experience photos.

This is probably getting long.  I’ll take another minute or two to say Goofball and the chess board are pretty cool.  The wine glass didn’t work.  Glass has to be extremely clean, and well lit, or you end up with a glass that looks like the before image in a Cascade commercial where the Kitchen Counselor suggests switching dishwasher detergent.  For some shots like yours, masks are cut from black card to aid killing reflections.