Reply To: Fauxtogs who should end up on the main page…

I don’t think that shot has a focus problem.  “ODECA” on the lanyard of the front girl is sharp and the “5” on the shirt of the girl in row 3 is also pretty good.  That suggests focus was achieved and DOF was pretty good too.  It’s too bad Facebook strips EXIF data.  I suspect that was a pretty slow shutter shot and the blur is due to motion.  Lighting in that shot is terrible!

I’ve never used a $300 bridge camera for model shoots so I don’t know if it’s the camera limiting this “pro” or their inability to actually use it properly.

I think it’s his ability, or lack thereof.  If you have control of the light, even a cell phone will turn in a good photo, and if it’s your model shoot you should have control of the light.  Even if you don’t have control over the light, a bridge camera can provide reasonable results.  Casino Rama doesn’t want me to use my dSLR’s in their theatre.  Their thinking is that a good camera will allow saleable photos, and they do their best to prevent the audience from taking good photos, which I think is a shame because I see lots of people with their cell phones out shooting both stills and video.  In automated modes, the camera struggles.  I like the lights in this one, but the performer’s images suck!  Judging by the cameras I see in the audience I suspect poor, burned out photos are all a lot of people go home with. 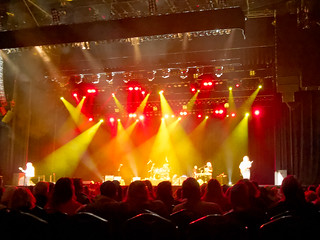 It was taken in Aperture Priority mode which gave good spotlights but burned out the performers while the audience was black but recoverable in Photoshop.

But with a bridge camera like my wife’s old Canon G11 (5 generations old, now), you can tell the camera what you want, and it delivers. 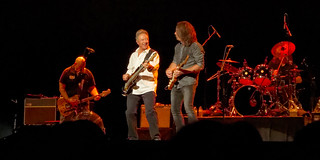 That Fujifilm he’s holding appears to have a pop-up flash and a hot shoe, so a good flash could be attached for shots like the “little models”, and in a studio environment you could use hot lights or off camera strobes.   His lighting and post processing are both bad.