I’ll comment on a few… it looks like you are on your way, but have a few things to work on.

I agree with what Cass said, but also, what bothered me more was the tree right behind her head. No, it’s not in sharp focus which helps, but it really appears to be “growing out of her head” still. If you would have stepped a foot to the side, it could have been avoided. I love the bokeh though. It really sparkles. Maybe increase the contrast a little and fix her eye.

^ This one is quite nice. Lower the red saturation in her face a bit and maybe add a tiny bit of fill light. She’s cropped in a little tight; I’d like to see a little more of the background because it is beautiful. Even though her face seems slightly underexposed, you did a nice job not overexposing for her cream sweater.

^ Very nice posing. It looks natural. I know Cass didn’t like the hand across her stomach, but I actually kind of do… maybe that one is a matter of opinion. I think it works well because she is thin, but on an overweight person it would bring too much attention to that area. Again though slightly too red in the face but that can easily be fixed. 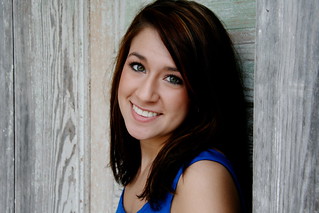 ^ Great portrait, great connection with your subject, excellent exposure. The little bit of head cut off is somewhat bothersome but does not ruin the photo. It doesn’t particularly bother me but some might not like it.

^ Firepit in the background really pulls my attention away from the subject. Not as strong as your other portraits.

^ This one would have looked much better with a shallow depth of field. The angle is too high, creating foreshortening of her legs. Also the skin is quite orange.